I’m on media blackout, but I look forward to playing the demo myself soon.

I’ll wait until they release the alternative costumes DLC.

Fuck, @Das. Those gifs are grinding Chrome to a halt. This is going to be a painful thread to browse.

I was skimming through the demo video and it looked pretty damn good, but I still don’t think it’s going to meet the extremely high expectations it has built up among fans. Better than FF12? No. Better than the FF13 trilogy? Yes.

Chrome is broken. Stop using it.

I’m excited to see how well this game is received.

I’m warming up to the English voices, but providing they’ll be including the Japanese voices in the final game, I’ll be playing with those enabled.

I’m excited to see how well this game is received.

Difficult to gauge until after everyone has played the demo. We can have a better impression then.

The Final Fantasy XV: Episode Duscae demo included with early copies of Final Fantasy Type-0 HD is named after the region Duscae, which features a lot of vast greenland and natural land formations. The part you’ll be able to explore in Episode Duscae is only part of the region, which itself is part of a bigger world more than 10 times bigger than the Duscae region itself.

There is a reason you’re stuck in the Duscae region in the demo. Your car is broken, because one certain blonde guy (ahem, Prompto) broke your car. So for the mechanic Cindy to fix your car, you’ll need to get money, which is the objective of the demo. You can figure out how to get the money yourself, but the demo’s main quest is to defeat the Behemoth, a creature wanted for a huge sum of money. If you take on the Behemoth quest, the first thing you’ll need to do is look for it by spotting footprints and such. But you’ll also get many other quests.

When it’s nighttime, many dangerous creatures will come out. So you can choose to camp (which auto-saves the game) in order to avoid them. When you camp, Ignis will cook for you and give you buffs. Buffs in Episode Duscae include:

In Episode Duscae, the food cooked is chosen by Ignis, but in the full game, players will get to choose what’s made.

Here is the official fact sheet outline of Episode Duscae, via Square Enix:

When you’ve spent your entire life looking out at the serrated city skyline, it’s easy to lose yourself in the sprawling Duscaen landscape. The prince and his retinue were halfway to Cauthess when their daydreams came to a sudden, screeching halt—the Regalia’s last gasp before giving out to the unpaved backroads.

Now they were truly lost in the landscape: broken down by the side of the road with the Disc well out of walking distance. The Archaean, Titan, would have to wait. He’d been dormant for ages anyway. The first order of business was getting back on four wheels.

A New Generation of Final Fantasy: The latest platform technology brings Duscae to life, rendering fast-paced action against breathtaking backdrops under a sky that changes in real time.

Open World Exploration: Guide Noctis and his entourage over the plains, through the woods, into the dungeons and around the outposts of Duscae as players roam freely about the expansive region.

Summoning: Uncover the astral power that will enable Noctis to call larger-than-life vengeance down from the heavens.

FFXV demo impressions are flowing out.

It feels like a very long while since a Final Fantasy universe has felt like one I’d want to spend time in. I’m still not entirely convinced by the characters or that their chatter won’t begin to grate after a few hours, but the juxtaposition of traditional Final Fantasy tropes and aesthetics with more modernised, realistic elements like the party’s car and costumes didn’t trouble me nearly as much as I thought it would. Where a few of the past series entries felt like you were being harried down a long corridor, funnelled from one fight to another, Final Fantasy 15 seems to appreciate the quieter moments as much as the whirl of battle or the excitement of exploring: cooking, wandering, telling stories, standing still and looking.

Kingdom Hearts grows up, gets open, and changes its name.

I enjoyed my time with Episode Duscae and I’m waiting for Type-0’s launch so I can see more of it. Square Enix representatives told me Episode Duscae is 3-4 hours of gameplay if you only focus on the story, but the demo should have more content that that if you get out and explore the Duscae countryside.

I just spent two hours playing Final Fantasy XV, which I can confirm is a real video game that actually exists. The good news: it's brilliant in a lot of ways, and from what I've played so far, it really does feel like a Final Fantasy game....

I have a lot of thoughts. The short version: Final Fantasy XV is full of smart ideas, and although the tropes are all there—phoenix downs, gysahl greens, peppy victory music—it feels totally different than any Final Fantasy before it, more akin to Skyrim or Far Cry than any JRPG we’ve seen to date. But can Square Enix’s tech live up to their vision? The demo I played was janky, peppered with distracting jaggies, and full of framerate drops that made exploring FFXV’s open world feel like more of a chore than it ever should have been. 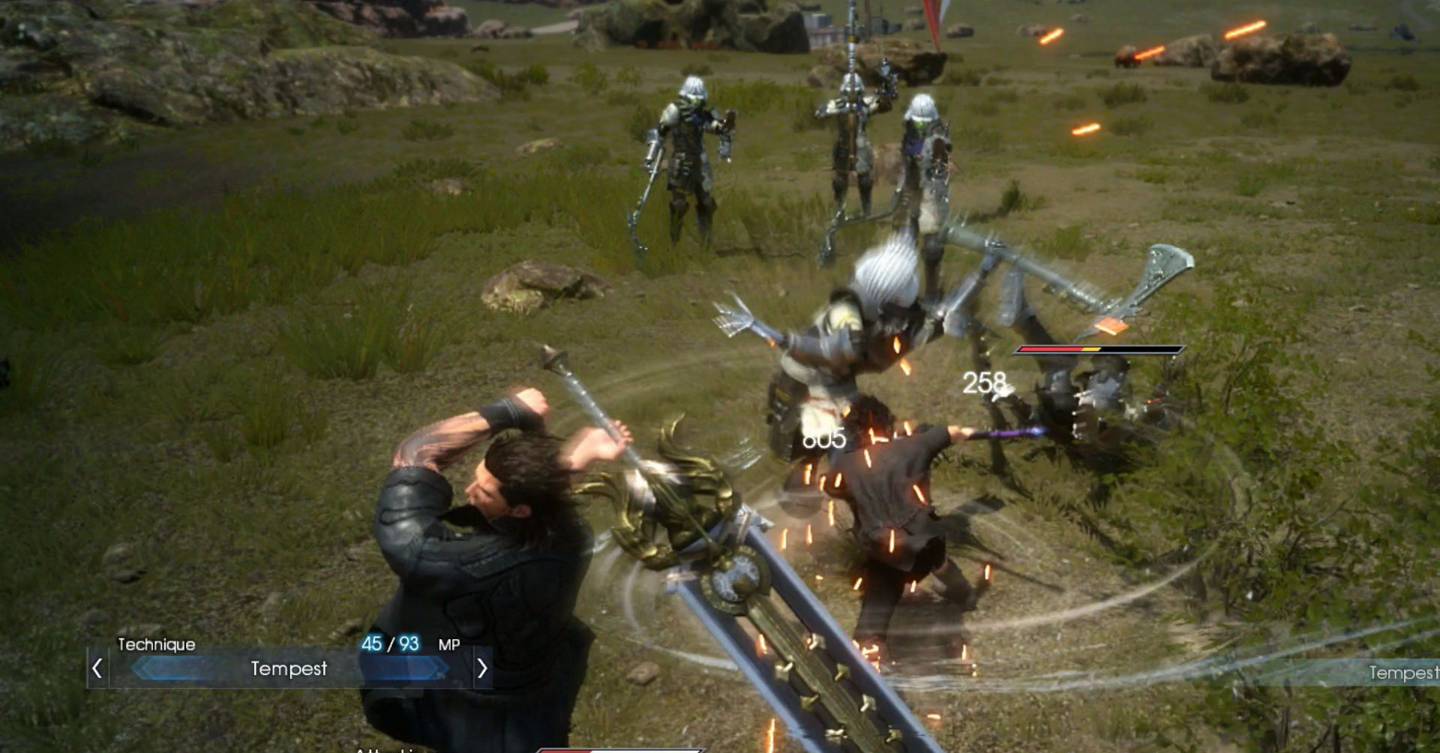 Final Fantasy XV is arguably the most eagerly awaited entry in the series ever. WIRED.co.uk goes hands on with an early test of the Episode Duscae demo, discovering a radical evolution of Square Enix's beloved RPG franchise

Overall, it feels closer to Dark Souls than anything. You’ll have to learn attack patterns, keep your guard up and retaliate when an opening presents itself. Another similarity – and a huge departure for the series – is that experience points are earned after defeating each individual opponent, but it’s not until you reach a campsite to rest that they’re applied to the team, levelling them up and unlocking their potential. Like Dark Souls, it becomes a risk versus reward proposition, with more powerful enemies coming out at night.

Despite my best efforts to the contrary, I’m feeling a little hype coming on.

This sounds like exactly what the FF franchise needed.

I caved and ended up pre-ordering Final Fantasy Type-0 even though I won’t have time to play it between Atelier Shallie and Bloodborne. At least I should have time to try out the demo.

Some people are having a shit fit because the girl in the original trailer, Stella, has seemingly been changed to a new character design, the blonde girl Luna, with a new name also.

I’m on a black out until I play the demo. Final Fantasy Type-0 HD should be at my house tomorrow!

I completed the demo. Overall, it’s shaping up to be a good game, but it has many technical issues. After I spent the night at a camp site, the camera control flat-out stopped working. Lots of moments where Noctis would blend into the geometry of the terrain on the ground as well. There was another moment where I went to bed at a camp site, and the screen stayed black with the camp music playing (no food showing).

The battle system has a high learning curve. There are lots of button combinations to remember, but your muscle memory will eventually keep them in mind each time. The enemy AI is too spastic for my liking, especially those wolf-looking beasts. When you slash at them for a bit, they run around and hardly let you hit them. That’s probably why they created warp slashing. I also found that some enemies were really hard to kill. It could have been that I needed to be a higher level. I’m sure there’s lots of fine-tuning to be done to the enemy level scaling system.

My favorite dungeon design was the cave. It reminded me of doing a dungeon with a party in FFXIV. I hope there are more dungeons like that in the final game. The “stealth” scene with the behemoth was fine, I suppose. It was kind of a gimmick, though. The difficulty was really high when fighting it properly. Had I not summoned Ramuh, I don’t think I would’ve killed it. On that note, Ramuh looked breathtaking.

Thats’s a lot of blur

Yeah, the motion blur is becoming a big issue. I’ve read that if you stay far away from your TV, then it doesn’t affect you.